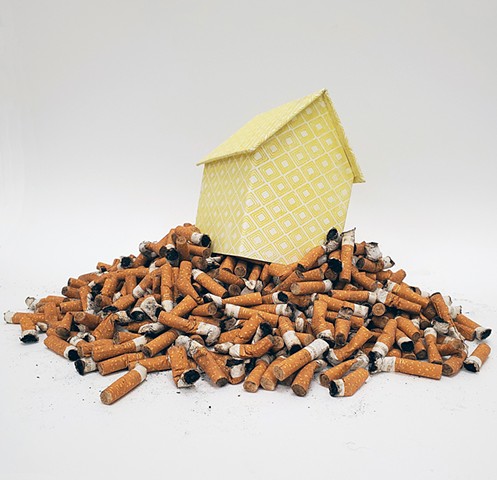 Someday is the thing people say when they mean never

Since the death of my mom in 2014, I have consciously considered the idea of home. What is home? Is home where I was born? Where I grew up? Where I live now? Is home my family? Is it my mom? Is home something inside myself? I am jealous of people who have places they feel connected to, where they long to live. Those kinds of places that ground them and feel like their home. I have longed to have a place I call home – perhaps for my whole life.

In October 2020 I was determined that I needed a change of scenery to clear my head and rethink my art practice. I decided to take a road trip from Pittsburgh to Salt Lake City. I gave myself one question to ponder during this trip - what is home? I put it in the back of my head and set-out on my journey through eight states. One of those states was Nebraska where in 2010 I had done a three-month residency at the Bemis Center for the Arts in Omaha. It was at this residency a new friend made a comment that no one had ever observed about me before. She stated, “You grow where you are planted.” It was not a phrase with which I was familiar, but I understood it and it was very true. I have always felt that wherever I was, whether it be a week, a month or 10 years - that is where I live. As I passed through Omaha, Nebraska I remembered that conversation with fondness and then let it move to the back of my thoughts. It wasn’t until returning to Pittsburgh, nearly six weeks later and over a decade after that conversation that her words again flooded my consciousness as ideas of home circulated throughout my mind and body. I thought about that phrase as it pertained to me. I realize now my friend was telling me that home for me is simultaneously nowhere and everywhere.

I started to construct small three-dimensional houses. On the outside are patterns made from etchings that help to create a feeling of wholeness and continuity to the house. Appearances have always been important. What was happening behind closed doors was often very different than the perception people had of me or my family. There are no windows or doors. My family, like so many families, had secrets. I was trained from an early age to keep these secrets – never telling anyone, not even my closest friends. I have wallpapered the walls of the homes. In order to see these interior walls, the viewer will have to do a little searching to see what’s inside. Because our lives are not just one story but many, many stories, each individual house only represents one small piece of that history. The narratives are messy and conflicting. Happiness, love and joy co-exist with fear, anger and sadness. The houses explore what home meant for me growing up and what it means for me now. Home is where I was, where I am and where I will be.